In this model Octan provides fuel for Micropolis vehicles, and a taco truck provides sustenance for their drivers. 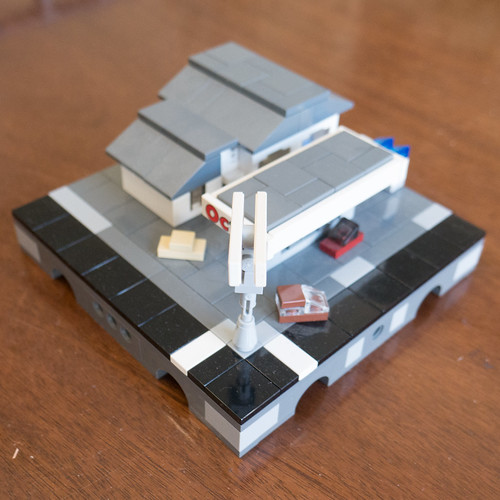 LEGO has sold many Octan gas stations over the years, and other models in the City product line with Octan branding besides that, like race car sponsorships. It’s a fictional oil company made up by someone at the LEGO company years ago, but as the Brothers Brick pointed out a few years ago, someone in Russia liked the name and logo enough to make a real-life Octan station! Were they just LEGO fans or too lazy to come up with their own brand and logo?

Anyway, this is a Micropolis gas station decorated with the classic red and green Octan signs: 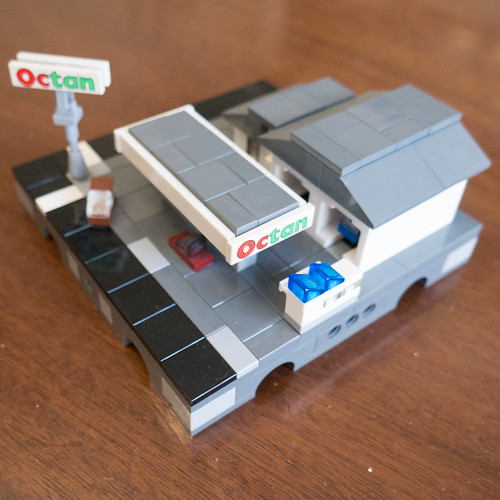 In this view you get a better view of the gas pumps and can see there’s a taco truck visiting to feed the mechanics in the garage. Note too that the roof over the pumps is just slightly higher than the white tiles (and signage) around the sides. Inside there’s a half-plate offset to add this subtle bit of depth. 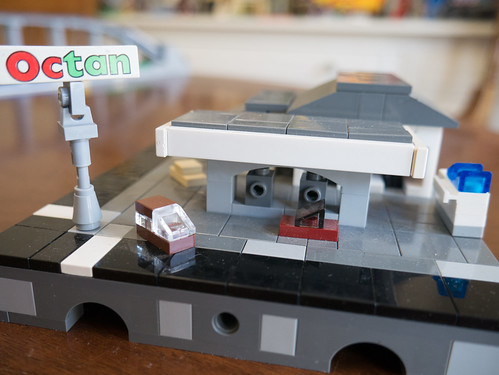 This view gives you a better angle of the Octan signage, and on the main building you may be able to make out that the roof is offset by 1/2 stud from the walls. In Micropolis scale, this is important to make the overhangs not too big but still to stick out at all. The roof is an odd number of studs wide while the building is an even number, and the roof is attached by jumper plates and/or studs into the tubes of roof parts rather than between them. If you look very carefully beyond the “O” of the sign on the roof over the pumps, you might see that in the main building there’s a 1×2 plate with rail filling in the gap between bricks there. 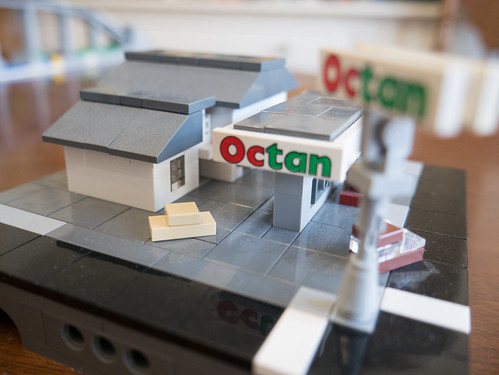 Looking beyond the taco truck, you can see a car jacked up to be worked on inside the garage. 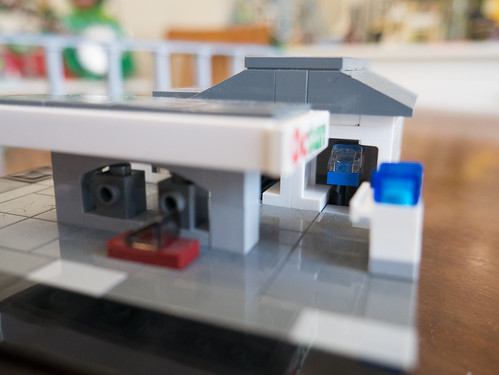 Like a lot of the models I’ve been blogging about lately, this one was built a few years ago but never shared here before. If I were to build it today I’d probably use 2×3 tiles on the roof instead of 2×2 and 1×2, and a few other new parts would make this a bit better probably. But it’s pretty good as is, I think.