This hospital building is inspired by some old San Francisco General Hospital buildings from 1915. I built it a few years ago but like many of my models I haven’t gotten around to posting about it on my blog until much later. This was part of my Micropolis display featured in the Bricks by the Bay 2020 Virtual convention. 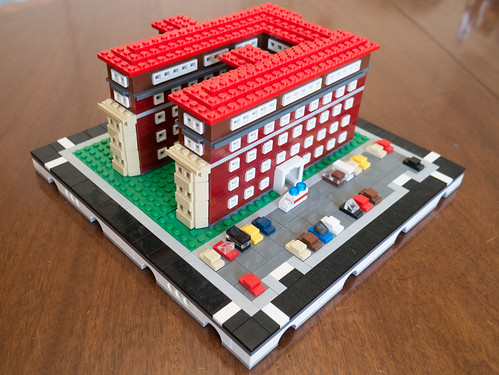 The LEGO model occupies a full Micropolis city block, with roads on all four sides. I built it in 2013, I think — the earliest photos I can find of it were from BrickCon that year in Seattle.

This model is based on buildings 10/20 and 30/40, built in 1915. These buildings survive today as a part of the Zuckerberg San Francisco Hospital and Trauma Center. Each pair of buildings is really one building, with connecting corridors between the two buildings in each pair on every floor, making it basically one big U-shaped building. Click any of the photos of the model to see the Flickr album.

The base includes a small parking lot with an ambulance in front of the entrance. 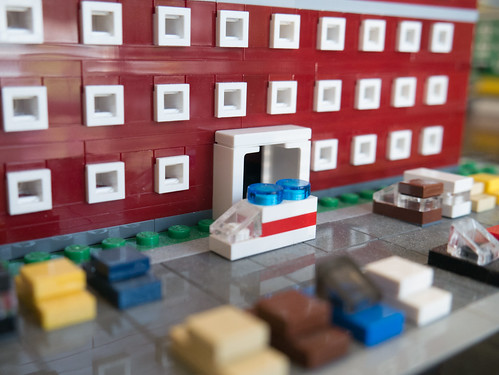 In this pair of photos you can see how it is designed to easily separate from the base plate. This makes it easier to pack and transport, since the building itself only uses about half of the city block. 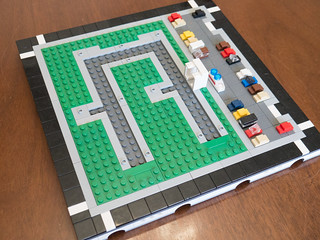 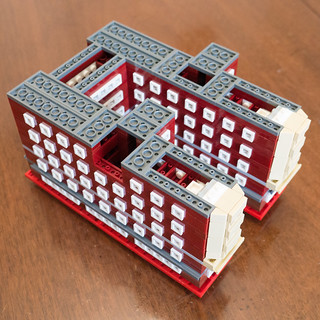 This close-up shows you how the “bay window” sections are built. I used this as an example in my Brick Geometry presentations at various conventions over the years. The sloped parts making the diagonal sections are attached to the studs of 1×1 bricks with studs on the side, even though those bricks are mounted in alternating studs-out and studs-in directions, so that the undersides of the studs-in bricks make up street-facing windows while the studs on the studs-out ones hold smooth tiles representing the walls below those windows. 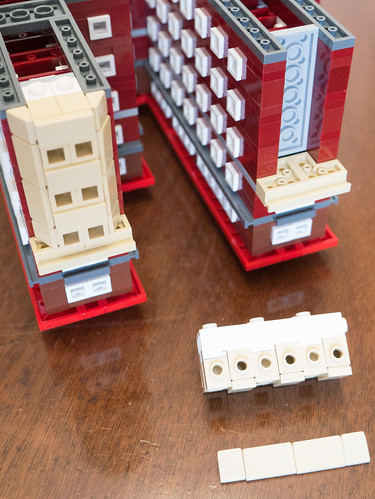