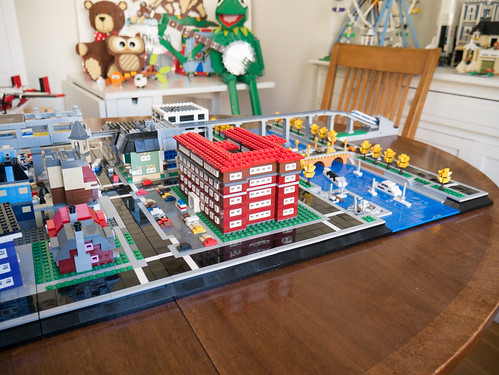 These border pieces provide the other half of the road around the edges of the layout, and hide the sides of the modules so your eye isn’t distracted by the Technic pin holes, arches, and multi-colored bricks there. It’s not an original idea; I’m not sure where I got it from. I think some convention I went to years ago had them, but I don’t remember where or when that was or who designed them. Here’s what it looks like as you pull them off the layout: 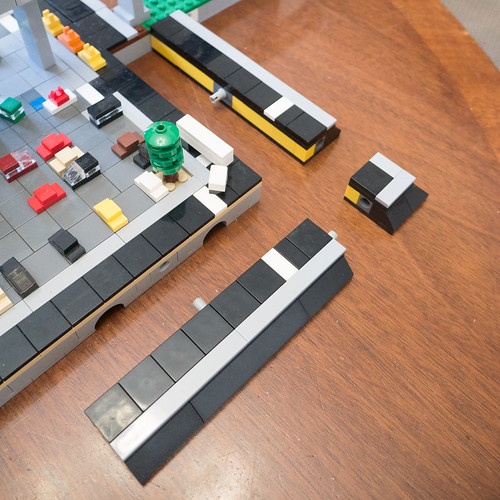 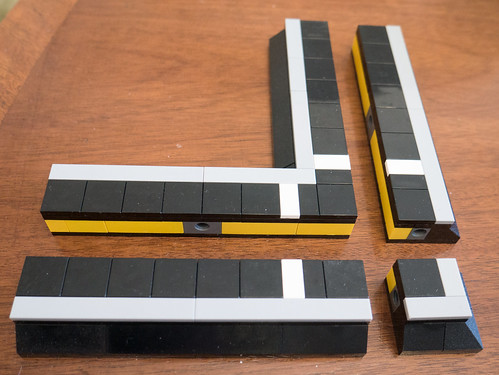 I also built two special modules to go on either end of my canal. 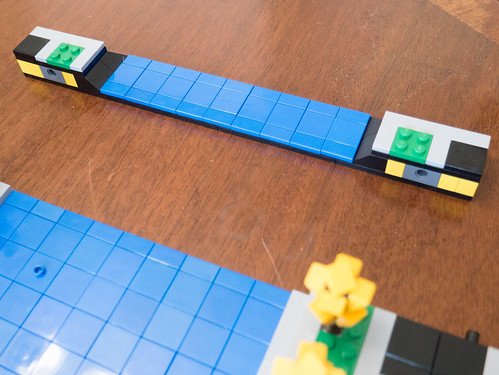 I built some of these a couple years ago and have had them in a few BayLUG shows since then. However, the design I had originally done used 1×2 Technic bricks to connect them to one another, which was a problem in the corners, where I wasn’t able to make these little 4×4 corner segments, but instead had the corners combined with four of the sides as 4×20 side+corner combination segments. Then at one of the shows, club member Davin White suggested the idea of using 1×1 Technic bricks on the edges, which would make it possible for the corners to be separate 4×4 parts.

For this year’s BBTB show I rebuilt my border to fit Davin’s idea. I broke up my 20-stud-long side/corner combo modules into distinct sides and corners, replacing the 1×2 Technic bricks with 1×1 Technic bricks and 1×1 yellow regular bricks, and built enough additional parts to go all the way around the layout.

After the convention I worked out a system to store/transport them. The sides are grouped into fours and connected together with Technic pins to make 8×16-stud long blocks, and attached to these end brackets made from Technic bricks. The vertical red brick keeps the end bracket from coming apart. On the near end of this photo the four inside corner elements sit, anchored by the green 2×2 plate on the top of the canal end module, and on the opposite end there’s a slightly different bracket that has an extra connection which the large inside corner piece connects to. Note the two blue pins in the middle row of the bracket – those have axles instead of pins on the other end; they don’t need to clip into the side pieces in order to keep them from moving around, so I used the pin-to-axle pieces instead of regular Technic pins. Also, I’m using the low-friction grey pins as they are easier to remove. 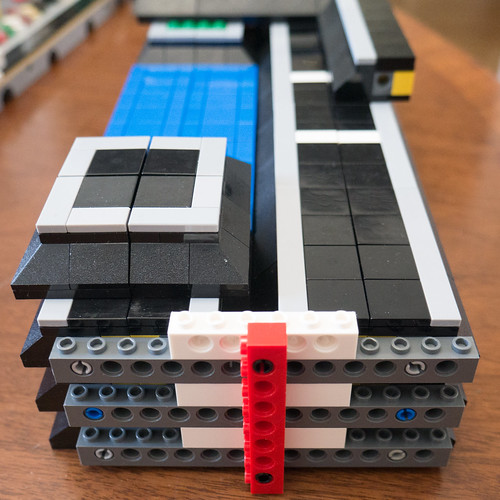 I’d encourage all Micropolis builders to build edge pieces like this, but would caution everyone to pick a color scheme for the hidden side of the elements (I’ve used all yellow, with dark grey Technic bricks) so it’s easy to tell yours apart from other builders’ when it comes time to tear down a collaborative display.

One thought on “Micropolis Border”