I’ve created a bunch of new MOCs (“My Own Creations”) for Día de los Muertos (Day of the Dead). BayLUG honored the Mexican holiday by displaying our themed collaboration at the Museum of American Heritage in Palo Alto, CA. The show will continue through January 15 (see schedule below), if you want to come see it. 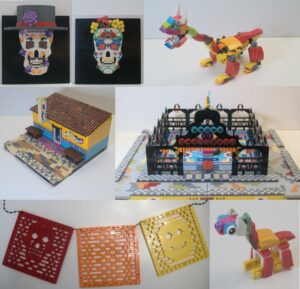 Although the club had been working on the Día de los Muertos display for over a year, I hadn’t built anything for it until now. The club had a really nice display at the Bricks by the Bay convention in June, but I didn’t have anything in that exhibit. I really wanted to have something before the actual holiday, which falls on November 1st and 2nd each year (also known as All Saints Day and All Souls Day), however.

It started with the club’s online (Zoom) meeting on October 23, where I wanted to build something for the contest, which had a Halloween theme. I built two skulls, one male and one female. I won, but we had more entries than prizes so I don’t know if it really counts. Anyway after the meeting I decorated them to turn them into calaveras (a.k.a. “sugar skulls”) for Día de los Muertos:

Next, I decided to try my hand at making papel picado out of LEGO. These are a traditional Mexican decorative folk craft consisting of a string of flags made of tissue paper with designs cut out of them. These are commonly put up for a variety of occasions, both religious and secular, in Mexico, including Day of the Dead. I built these three papeles which are displayed on the ofrenda (altar to the dead ancestors) at the museum.

I also wanted to do something for the minifigure-scale city of the dead and village of the living, inspired by the Disney Pixar movie Coco.

While I was trying to decide what to make, I built the LEGO set number 75574, “Toruk Makto & Tree of Souls” based on the movie Avatar. The dragon-like creature (Toruk) from the set reminded me a lot of the alebrijes from Coco, and I decided to try to somehow turn it into some alebrijes.

Alebrijes are not really part of the holiday, but they were included in the movie Coco where they acted as spirit guides for the dead. Really, alebrijes are a folk art tradition that started in 1943 in a dream by Mexico City by papier-mâché sculptor Pedro Linares. Check out the Wikipedia page for Alebrijes for the whole story; like Day of the Dead, it’s fascinating how recent it all is. Nowadays it’s a common souvenir for Mexican tourists to bring back a hand-carved alebrije. Here’s a better shot of the Toruk so you can see what I mean:

So I disassembled the Toruk into its component parts (torso, pair of legs, two pairs of wings, and head) and proceeded to build an alebrije based on each of them. My plan was to build a park or plaza for them to hang out in for the City of the Dead part of the display, and to build a small version of each one for sale in a shop in the Village of the Living.

As an example, here’s the first alebrije I made, using the torso from the Toruk with a new head and legs:

Here’s the small version of that model:

… and here is the plaza I built for the City of the Dead. Our club produced printed tiles for this collaborative project, so my models use them extensively in the flooring and a few other areas. They are standard LEGO parts, but with printed patterns of our own design so you won’t find them anywhere on BrickLink!

You can check out All Días de los Muertos 2022 MOCs in one place on Flickr or click any of the above photos to go to an album just for that portion of the project.

If you want to visit the show in person, you already missed November 1st & 2nd, but we will be open this weekend (Saturday & Sunday, November 5th & 6th), and then reopening for weekends starting on December 3rd to continue as our annual holiday show (the Day of the Dead exhibit will remain, however). Show dates are:

Check out the BayLUG Holiday Show page for more details.