BayLUG, the Bay Area LEGO Users’ Group, had its second in-person, indoor club meeting since the pandemic started on October 8th in San Leandro. It was our annual meeting to celebrate the club’s anniversary, but that was somewhat muted as our club president was out sick with COVID-19. I was anxious about the in-person meeting, but I went and even took my N95 mask off to eat once or twice. Not everyone was as paranoid as I was, but as far as I know, nobody got sick from attending the meeting which is the important thing. Anyway, it was great to see and hang out with other humans again, which is pretty novel for me these days, despite having all my shots. I am looking forward to more such gatherings in the future.

The meeting featured MOCs (“My Own Creations”) by various club members, including several that you will be able to see at our upcoming Día de los Muertos (Day of the Dead) show that we will be setting up next weekend in Palo Alto, which will transition to our annual holiday show ongoing through the Thanksgiving and Christmas season until January. 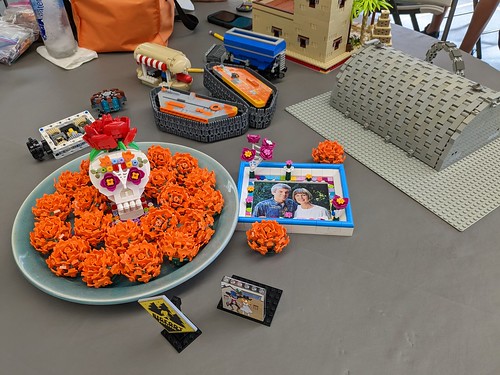 Day of the Dead MOCs

A highlight of the meeting was a presentation by Autumn about modular buildings, and she brought a whole city of her models to help illustrate the various techniques in the presentation.

The building contest had a Halloween theme, and many adults built impressive models. There weren’t many models by the kids, so each one of them was declared a winner and we only voted on the ages 18 and over models. The winner was this wonderful scene featuring a corn maze by Jenny.

As usual, our bulk vendors were selling bricks to the members by the pound.

We also built a large model of our club logo using bricks donated by the LEGO company to commemorate their 90th anniversary. I designed instructions for the model to be built in 3 sections, and volunteers worked for a few hours to assemble each of the sections in parallel. Our logo consists of 3 1×1 bricks, a red one with “B” and “A” on it, a white one with “Y” and “L” on it, and a blue one with “U” and “G” on it. We use a yellow backdrop when displaying the logo, so I designed a zig-zagged wall to go behind the letters, and used green bricks where it doesn’t show for structural support.

I wasn’t the only person involved in the design though – Adam did much of the overall design including how to use a baseplate on the top of the bricks to bridge the opening, and Mairead designed the LEGO stud. I took their designs and added the lettering, and built instructions for the model. Then all the club members pitched in to build it.

We’re having an online meeting today (October 23rd) on Zoom where I’ll be giving the latest iteration of my Brick Geometry presentation, and having another Halloween theme entry for which I’ve built an entry (For once!). Watch this space after the meeting for more about that.

Our next public event is the above mentioned holiday show, which will feature our Día de los Muertos (Day of the Dead) layout loosely inspired by the Disney/Pixar movie Coco. The show opens Tueday-Wednesday, November 1-2 (the days that Día de los Muertos is celebrated) and the following weekend November 5-6.

After pausing for the rest of November, during which time we will be updating the displays and adding more general-interest models and Christmas themed items, it resumes on December 3rd and continues through January 15th, on the following dates:

Show hours are 11:00 AM to 1:00 PM by reservation only, and 1:00 PM to 3:30 PM with no reservation required. The location is the Museum of American Heritage, 351 Homer Avenue, Palo Alto, CA 94301. Cost is $4 per person; see our club page about the event for all the details, including COVID-related policies. Funds are shared with the museum, and our club’s portion helps pay for club expenses such as our Zoom license, storage, legal and insurance fees, etc.