For the second day of this year’s City Advent calendar we get our first minifigure. 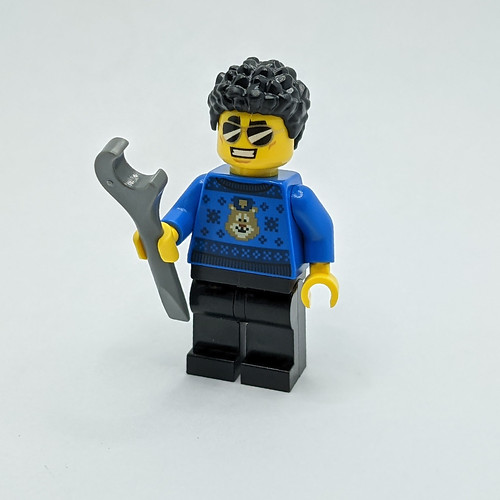 The head is double-sided, and on the back you can see his eyes without the dark glasses. 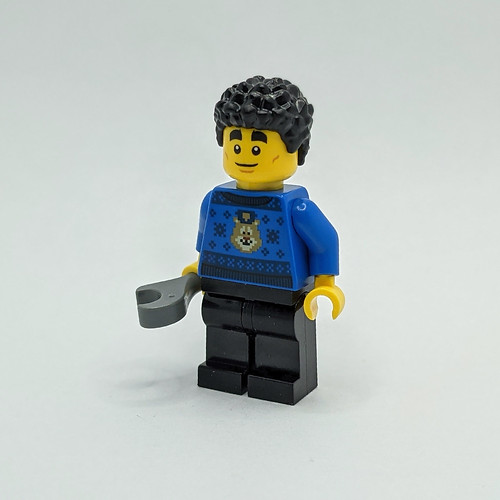 The torso print is a Christmas sweater with a picture of the face of teddy bear wearing a police hat, pixelated to look like knitting. 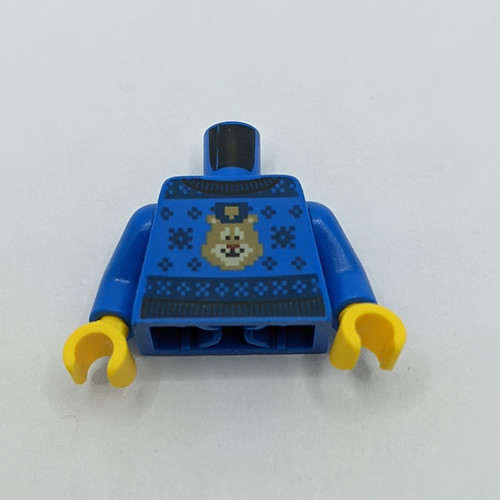 And on the back side of the sweater you can see more knit pattern printing. 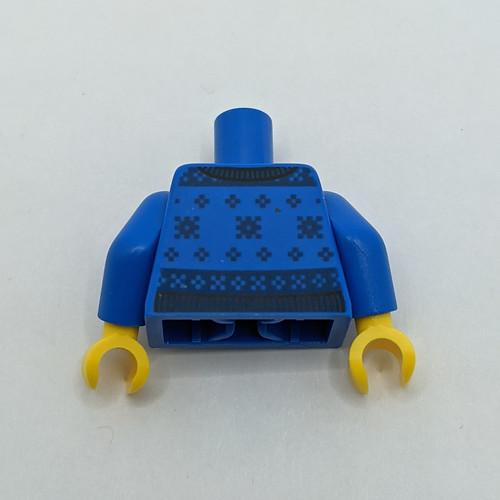 On the side of the box you can see all of the characters in this year’s Advent calendar set, and according to that this is Duke Detain, a police officer from the LEGO City Adventures TV series, which I’ve never seen. The teddy bear is Cubby, Duke’s childhood teddy bear and imaginary friend. It looks like this year’s Advent calendar features characters from that show in much the same way that the Star Wars and Harry Potter are based on those movies.

In case you aren’t up to speed on the TV show either, here’s a preview of the second season of it, which introduces all these characters.

It looks like LEGO is really leaning into the police themes this year, which I think is really unfortunate. The TV show has a police theme, and they’ve just recently announced 2021’s modular building to be a police station (set 10278). I know LEGO is a Danish company, so they may not be as tuned in to the American zeitgeist, but in this country it feels pretty tone deaf to be doing that at this time, after the murder of George Floyd and subsequent protests against police brutality in this country and around the world.

Of course, these figures are also all yellow, which to most people translates as the White (Caucasian) race, so I suppose we don’t have to worry about Officer Detain killing any Black minifigures in custody. The LEGO City has always been officially race-neutral, with every minifigure from their in-house themes being yellow rather than flesh toned, which according to LEGO means that there just are no races among LEGO minifigures. They don’t see any issue with Black and Brown skinned kids being unable to find characters that look like them to play with. Only the minifigures that are based on real people (or real actors playing roles) have flesh toned skin, and remarkably few of those are brown in color. LEGO Friends does have flesh-toned (including various shades of skin) minidolls, at least.

Of course Denmark is a different place than the USA, and it is much more racially homogeneous there, but I would expect a global company to be more sensitive to the feelings of customers in its biggest market, where race is a huge issue, especially this year and especially with regards to the police.

I don’t want to make this blog be about politics, but when I see people’s basic human rights being denied, I feel obligated to say something, and to call out the LEGO company when I think they can and should do better about these issues. In yesterday’s post about Why I’m only doing the City Advent Calendar this year I spoke out about the need to support transgender rights, and in May I posted my Black Lives Matter sign (a repost of my 2016 original post about that model) which stands in the front window of my house proudly. Black lives really do matter, and I support the movement to defund police, and I think LEGO’s use of the police theme in these sets and the TV show are a mistake.

Why am I boycotting the Harry Potter sets but not these City police ones? The issue I have with J. K. Rowling is based on her personal bigotry and actions that are actively harming transgender women, and my desire not to give her whatever fraction of the money spent on such items she gets as royalties. LEGO’s City police models are more passively harmful, ignoring the issue rather than actively making it worse, but at least the money I spend on them isn’t going into the pockets of someone who is actively speaking out in a racist way.