Over the past few years I have followed a tradition of blogging each of the LEGO Advent calendars every day from December 1st through 24th. I’d buy the 2, 3, or 4 calendars produced by LEGO that year, and each day during the lead-up to Christmas, I’d open that day’s models, and build, photograph, and blog about them. But this year I’ve decided to only do the City Advent Calendar 60268. (CW: Harry Potter) 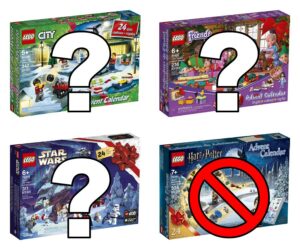 You may recall last year I had expressed some outrage about J. K. Rowling’s views on transgender rights and by extension I had some doubts about continuing with the Harry Potter calendar, but carried on since I had already bought it. In 2020, Rowling has only increased her transphobic statements, endorsing hateful causes publicly on Twitter and elsewhere, provoking actors from the movies to make their own statements in support of trans people. In case you’re not up to speed, Glamour has an online article explaining the whole story. Even LEGO made a (pretty weak, in my opinion) statement saying they had no relationship with her, only with the movie studio.

In some areas of social media I frequent, this has become a really hot issue the past few months, to the point that some people are posting content warnings (as I am doing on this post) about any Harry Potter related content they may share. I am lucky that Harry Potter appeared when I was in my 20s so walking away from that franchise is not too difficult for me, in contrast with younger LEGO fans who grew up loving Harry Potter books, movies, and LEGO sets. Many trans people have really identified with themes in Rowling’s stories as part of their coming to terms with their gender, so it is especially hurtful for the author of those stories to say such things. I have heard from many trans people who are boycotting anything to do with her work, and others who still love Harry Potter despite it all and are enthusiastic about buying the new LEGO sets coming out this fall! It’s all really complicated.

I feel it is important to support the rights and lives of transgender people instead of undermining and attacking them, especially for someone with her ability to influence so many people with her views. Trans women are women, trans men are men, and non-binary people are non-binary people. I am very dismayed at Rowling’s actions and am personally not willing to buy products based on her work, and that includes this year’s Harry Potter Advent Calendar set.

If I skip one calendar, why not stop there? Why shell out $30-50 each for multiple sets just to blog about them? So I took a long look at the other calendars, and decided in the end that I would skip the Star Wars and Friends calendars as well. I’m not a big Star Wars fan anyway, and especially for models based on the newer movies and TV shows I have often had to consult other LEGO blogs to even know what that day’s model is supposed to be. I’ve always enjoyed the bright colors and cheerful themes of Friends, but this year’s Friends calendar didn’t seem very inspiring to me. But in the end, I decided to at least do one calendar, and the one that appealed to me the most was City. So from now through December 24th, look for my posts about that day’s LEGO City calendar.