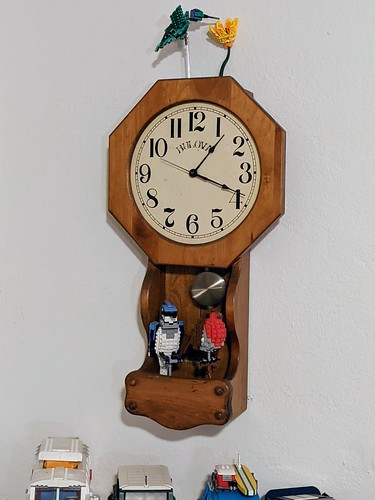 This is the clock that was in my house throughout my childhood, and when my mom moved out I found it among her things. The mechanism was broken but I bought a replacement on Amazon and got it working again. I was meaning to put some kind of plant into the pocket below the pendulum, but it gets so little light I wasn’t sure what might survive there, and anyway I didn’t have a pot the right size. But when I was organizing the bookshelf where I had been displaying the birds, I had the idea of putting them in/on the clock. I think it looks pretty nice there. I did have to redesign the bases a bit to make them fit, though.

The Birds set is one of my favorite of the LEGO Ideas sets. It is of course no longer being produced, but you can find it on Amazon if you don’t mind paying a premium price. If you missed out on this set and don’t want to pay so much, a better way would probably to get the instructions from LEGO customer service and if you don’t have all the parts then order what you are missing on BrickLink.

2 thoughts on “Birds on a Clock”