This is a repost of an entry I had originally posted on an old website in January 2003, before I started this blog.

This LEGO sculpture of a Maneki Neko (Japanese good-luck cat) was one of my earliest models, after building the PokÃ©mon out of basic bricks alone, I allowed myself the luxury of plates as well, in order to approximate the script on the coin. The cat itself is just basic bricks though, except for the arm detachment mechanism. 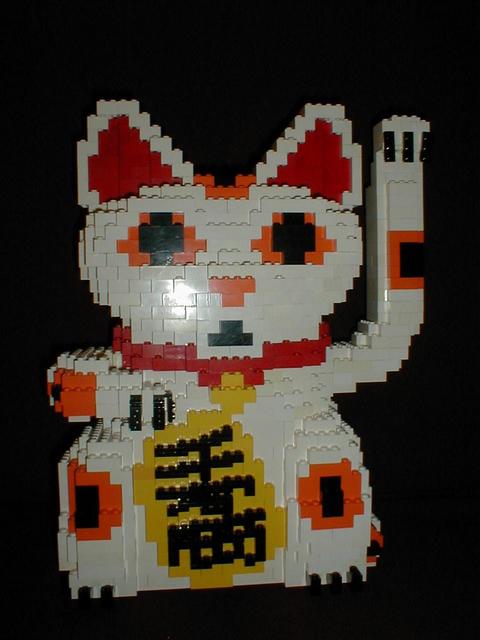 The Maneki Neko, literally “Beckoning Cat,” is a good luck charm used widely in Japanese business establishments and homes. It is believed to invite in fortune and good luck to its owner. In Japan, the hand sign to ask someone to come towards you is made with the palm facing down and fingers towards the person, and moving the hand in a scooping sort of motion; it is the direct opposite of the American hand signal for the same thing. The Maneki Neko is carrying a koban (gold coin from the Edo Period). The characters on the coin are åƒä¸‡ä¸¡, which translate to “ten million ryÅ” (the RyÅ (ä¸¡) was a gold currency unit in pre-Meiji Japan ShakkanhÅ system, predating the yen).

For more information on Maneki Neko, check out these links:

I posted the photos originally on Brickshelf and later created a Flickr gallery. Sorry for the flash and the small photos; my digital photography options were limited in 2003. Perhaps I will rebuild it and take some new ones.