This little relief mosaic was made in honor of my trip to Portugal this past June, where I attended the Paredes de Coura Fan Weekend. 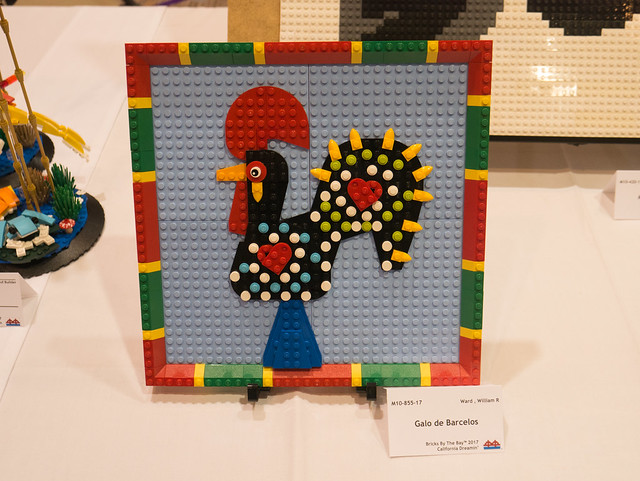 The Galo de Barcelos is a traditional icon of Portuguese culture, representing a folk tale of a dead rooster that crows miraculously to prove an accused man’s innocence. You see it all over Portugal, especially in the northwest, usually depicted as a black rooster facing to one side, with red comb and wattle and various colorful patterns printed on his body, including heart-shaped patterns on the wing and tail, and usually mounted on a light blue conical base.

My model is a mosaic, as it is flat, but there is some 3-D aspect as well, hence the term relief mosaic. The colors of the border were chosen to honor the Portuguese flag. For now, I have a few photos from where it has been exhibited (at Paredes de Coura and Bricks by the Bay) but haven’t done a photo shoot of the model yet. I’ll update this post with better pictures when I get a chance to make them. In the meantime the photos I have taken that include it thus far are available in this photo album on Flickr.