With the PokÃ©mon Go game being such a huge hit at the moment, I thought I’d post about some old MOCs that I built 15 years ago. Sorry about the photo quality – this was the early days of digital photography… 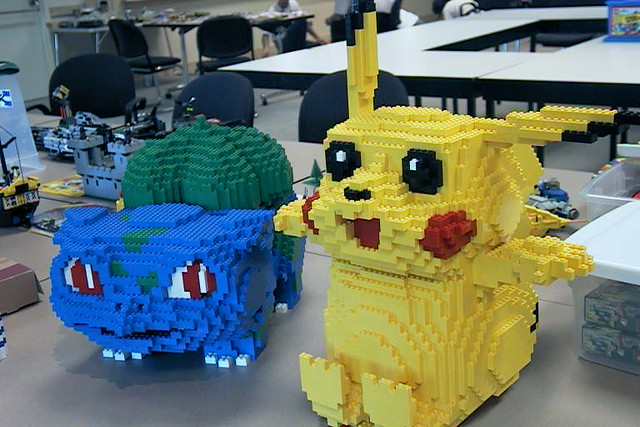 Way back in 2001 when I first got back into LEGO as an adult, I had been watching a lot of PokÃ©mon videos, though I was never much of a video game player. I collected the VHS tapes at flea markets and such so I could have the entire set of videos… I still have the tapes in storage somewhere, though I no longer have a functional VCR, and who cares about video tapes anymore anyway?

Inspired by the creations built by Eric Harshbarger (the AFOL whose work inspired me to become an AFOL myself – see My LEGO Story for more details) I went to Toys-R-Us and bought a bunch of the (now long gone from retail shelves, and much missed) 3033 tubs, 1200 basic bricks for only $20 each! Some of them on sale for $15! First I built a PokÃ© Ball, having heard that LEGO Master Builders are challenged with the task of building a sphere from basic bricks as part of the job interview. Then I went on to build Pikachu, Bulbasaur, and Squirtle.

The idea behind these models was not only to create a sculpture of the creatures, but to do so using only the most basic bricks, and only bricks available in the 3033 tub LEGO set, to counteract the argument of “But they have all these specialized parts they didn’t have when I was a kid.” Also, I took style inspiration from Eric’s sculptures, such as his Bart Simpson and Milhouse models.

At the time I had a different website which is no longer online, so the blog posts I had made about them are no longer available. But the photos are still up on Flickr: Pikachu, Bulbasaur, and Squirtle. You can see all the PokÃ©mon sculpture albums in one place in the PokÃ©mon collection. The photo quality is not great for those, and the finished Squirtle was never photographed.

Sadly the models are no longer built, but when I took them apart I did archive their design in LDraw, so I could rebuild them… and with PokÃ©mon Go being such a hit, maybe that would be a good idea. I think the designs of the models stand up pretty well but I’m sure there are some things I would want to change.

One thought on “PokÃ©mon, my first LEGO sculptures”