March 17th is St. Patrick’s Day, the day when just about everyone in the U.S. claims to be at least a little bit Irish, which means wearing green clothing and often imbibing copious amounts of beer with green food coloring added, especially when it falls on a weekend. (There’s very little to do with saints involved.) And more to the point, images of leprechauns. 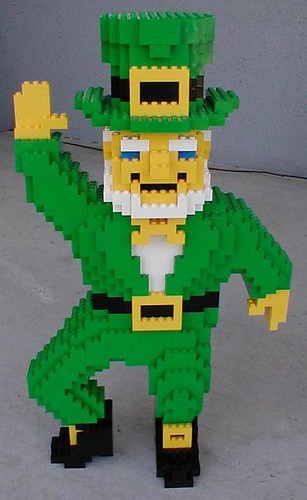 In honor of this auspicious day I present an old MOC that I made 11 years ago in honor of St. Patrick’s Day, but which has never been blogged about on this site. (I posted it on a now-defunct personal site I used to run before I switched my LEGO posting over to Brickpile.)

This Leprechaun was built for BayLUG‘s March 20, 2004 meeting, where we had a St. Patrick’s Day contest. You can see pictures of the contest entries in my meeting pictures album on Flickr from that meeting. View the leprechaun from several angles on the photo set page or see all the photos as a slideshow.

As a challenge to myself, this model was built entirely using regular plain LEGO bricks – not even plates added for details. I also used that approach for my Pokemon sculptures. At shows we often hear “Oh but they didn’t have all those special parts when I was a kid” from adults from the public. (Never mind that they actually did, unless they were a kid in the 1950s or maybe early 60s, but building models like this goes a long way toward defusing that argument :-) )