I just finished attending the first ever hybrid (both in-person and online) LEGO convention, BrickCon 2021.

Held in Seattle the first weekend in October every year, BrickCon is one of the top LEGO conventions. It never fails to attract the most talented builders from the Pacific Northwest, around the country, and even a few from overseas… at least, that’s what happens in a normal year. In 2020, BrickCon was one of many LEGO conventions to hold their event online, using Discord and Zoom. They did a creditable job of recreating the in-person BrickCon feeling over the Internet. This year, they returned to the familiar Seattle Center environs, but with masks, mandatory Covid-19 vaccination, and extra ventilation. However like last year we also had people (including myself) joining online via Zoom. The BrickCon team have already said they intend to keep the hybrid form of the event going forward, regardless of what happens with the Covid-19 pandemic.

The theme of this year’s BrickCon was a clever one: “TBD.” Initially this was chosen to mean “To Be Determined” to reflect the uncertainty of hosting an event in the Covid-19 era. They had a lot of fun with the theme though, with “Two BrickCon Decades” listed on the homepage, and many of the prizes, trophies, and contest themes being phrases of 3 words that start with those 3 letters. For example the official T-shirts say “Travel, Build, Display” and

There were also the usual assortment of games and contests, both in person and virtual-only versions. The online games were similar to last year, with attendees doing various challenges based on a particular LEGO set we were to buy before the convention. I didn’t buy the set, so I didn’t play those, but a week before the convention I was able to play the Unlimited Master Build contest, on the theme “The Batman’s Dead” — we had the challenge to build our idea of how one of Batman’s enemies claimed to kill him. I had the Roadrunner, as an agent of Acme, sell Batman a new Bat-rocket…. I didn’t win, but it was one of the top 4 finalists. I hope that in the future they are able to include more online and in-person participants in the same events instead of having different ones for each type of attendee. Here’s my model from that contest: 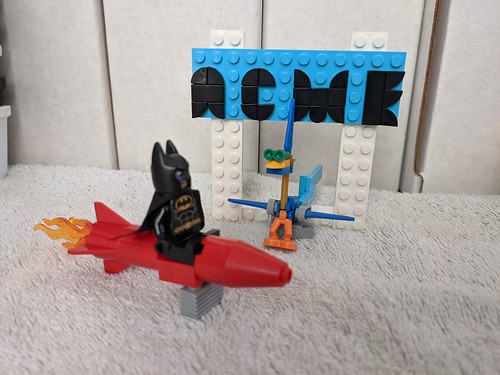 MOC (“My Own Creation”) displays were set up in the expo hall like in a normal year, and they had a place on Discord where you could share pictures if you wanted to show any models but are attending online. There was a video tour of the MOCs in the expo hall, and anyone attending via either method could see the photos on Discord, but it didn’t really feel like there was much opportunity for the online and in-person builders to share directly.

One of my favorite parts of the event was just the social hangouts on Zoom. Friday night I joined the SortLUG Zoom call after the opening ceremonies, and Saturday and Sunday we had BrickCon social Zoom rooms (with much the same people who were at the SortLUG attending). SortLUG started as a joke at the 2020 BrickCon virtual convention where people attending the “Sorting & Storage” panel wanted to keep the discussion going, and it turned into a weekly 12-hour Zoom call every Friday night, which people from all over the world join, depending on their timezones… As SortLUG started the week after last year’s BrickCon, the one-year anniversary of it is being celebrated with a 24 hour Zoom call next weekend.

The pandemic of 2020 and 2021 has shown us that it can be impossible to know what the future may have in store for us, but BrickCon is planning to go ahead with the same sort of hybrid event next year, with the theme “21, Time for Fun” on September 30 through October 2, 2022. I will probably attend online, and hope to see you there.

It’s been a while since I’ve updated the blog, and that’s because I haven’t been doing much with LEGO in over a year, except for building some sets. I have made major progress on my sorting of LEGO thanks in part to SortLUG, and I am feeling highly motivated to start working on LEGO projects again. And while I may not be attending any in-person events for a while, I do plan to be more active in LEGO online. So watch this space!