This is one of those books where the actual pages make up about 1/3 of the book’s thickness, because there is a box embedded in the front cover that is packed full of LEGO pieces… or so it appears at first. But when you open it up, it seems not to be quite all that. It’s just the pieces to build one of the models, the small reindeer on the cover.

And that’s my biggest concern with this book. I think a lot of people are going to pick it up thinking there’s a lot more LEGO included than there is, and when they flip through the pages and see some of the (truly great) ideas therein, they may think that the book includes all the parts to build them. However, it really just includes 41 pieces, and there’s not a lot else you can build with just those. So if you’re buying it as a gift for a LEGO builder in your life, make sure they have a pretty good collection of parts or they won’t be able to build anything in the book except the reindeer.

Also the flap was kind of hard to open. They put a sticker over the part that you are supposed to put your finger in to open it. My copy had a section of the perforated cardboard that was coming open, so I put a guitar pick into the gap and worked it around to the point where I could pull up the flap, and then was able to remove the sticker. The glue wasn’t too strong, but I feel that was a poor design choice that may end up with people ripping theirs open. 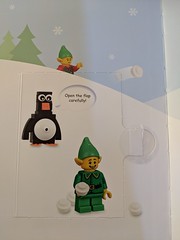 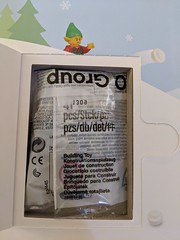 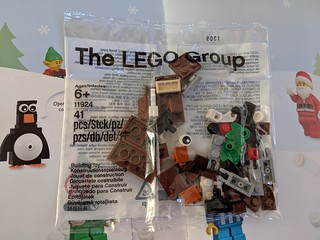 Still, it is a pretty cute little model, though I’d rather they used brown parts more consistently. Of course LEGO doesn’t always make every part in every color all the time, so you are somewhat limited in what you can do with a design like this. If you attach a paperclip or hook to the white plate with bar that his antlers are connected to, it should hang nicely in the Christmas tree. 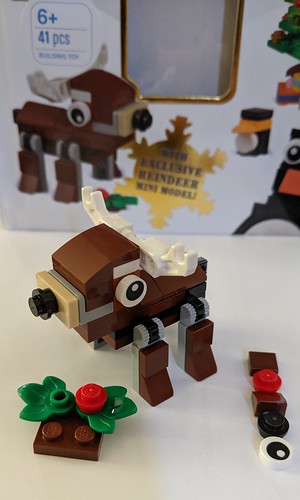 Now that we’re past those complaints about the included LEGO parts, let me get on to what’s good about it. The book is chock full of great model ideas. There are “[m]ore than 50 festive builds” according to the elf on the cover, though I didn’t count them. But there are some great designs and inspiration for Christmas ornaments, general household holiday decorations, and even games made out of LEGO. And each one has a number of great building techniques illustrated. While they only give step-by-step instructions for the reindeer, the models are not terribly complicated, they are well photographed (including showing the back side in some cases), and there are comments pointing out some of the key techniques behind them, so it should be possible for any competent LEGO builder to replicate most of them given a suitably extensive collection of parts.

As the title says, it’s a book of ideas, and some really great ones at that. If you need inspiration for Christmas themed LEGO models, this book may just the thing. I just felt a little deceived by the inclusion of so few LEGO parts, and fear that there will be some kids who get the book as a gift and will find it frustrating that they don’t have the parts to build most of the things in it. I think it would have been better (and cheaper) as a soft-cover book of just ideas, than to include the parts as they do. Here are a few photos of some things from the book to give you an idea of what is included: 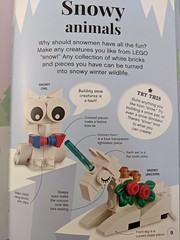 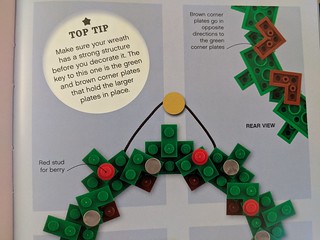 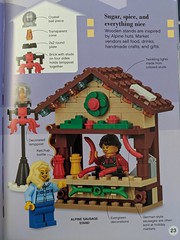 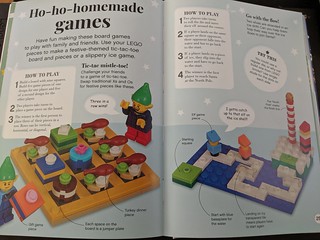 The book has 76 pages and 41 LEGO elements, is labeled as suitable for ages 6 and up, and is published by DK (Dorling Kindersley), a division of Random House. The models in the book were created by Barney Main and Rod Gillies – follow them both on Flickr for more inspiration!