I’m afraid I haven’t built much in a while – this is my latest major model, and it is over a year old! But I never posted about it here until now. It’s a teddy bear. I built my first teddy bear out of LEGO many years ago, back in 2002. That was built using basic studs-up technique, similar to my PokÃ©mon models. I think this one is quite a bit cuter, though much more difficult in terms of its construction.

I started by building the head, back in September of 2014. The key features are the snout and ears, so I built those first. That is the secret to building good sculptures, I think – build the key features (usually the face) first… if you get that right it almost doesn’t matter what you do for the rest.

During the local club’s annual holiday show I was working on the feet to go with it, and made a point to have them be asymmetrical, so that one of them is angled at 45 degrees while the other is nearly vertical. I finished the model in May 2015, just in time for Maker Faire, where it made its public debut. 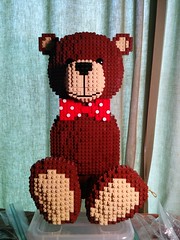 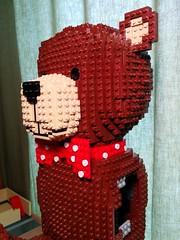 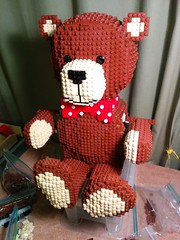 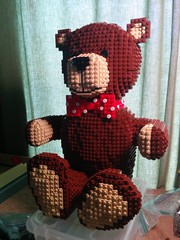 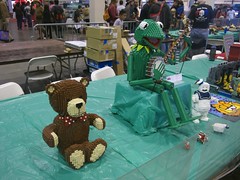 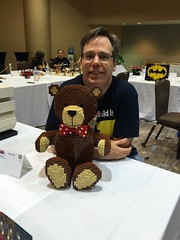 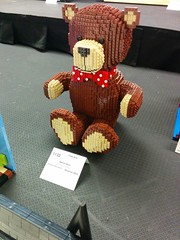 But on the flight back from Seattle, something happened to my luggage and it got pretty thoroughly shattered. I had put all my models into a large Tupperware bin, with bubble wrap and Ziploc bags. I put some of the smaller models inside the Teddy Bear (both the head and torso are hollow), thinking this would reduce the odds of it being crushed, but perhaps those things bounced around in there causing it to break? I’m not sure. Anyway, the head was almost completely disintegrated, and one of the arms was quite badly broken. The feet survived pretty well, and the other arm cracked apart but not as badly. 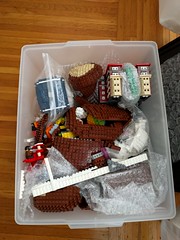 I was pretty disheartened by this, and it took me almost a year to get up the guts to try to repair the damage. Most of the models I had brought, like the Easter Bunny and the Stay-Puft Marshmallow Man, were items I had made a “backup” of in LDraw, but not so for the Teddy. All I had to go by was a few photos, and most of those were face-on. But apart from the feet (which survived intact) it is a highly symmetric model, so it wasn’t too hard to figure out. I just had to match up the matching parts from the left and right sides, until I had found everything that was missing, and fit it all together. 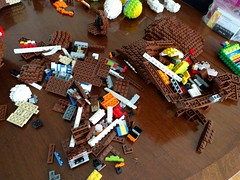 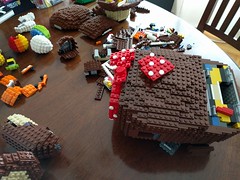 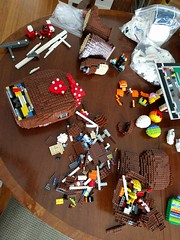 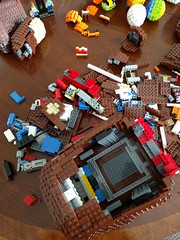 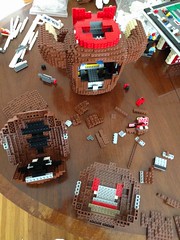 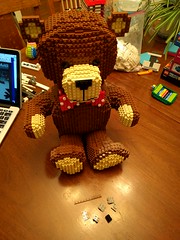 There were a handful of parts that were actually broken. I had to substitute those from my collection of brown plates. And there were a few parts where I couldn’t find them at all – a 1×8 tile was missing, and a couple of small plates. And then when I was done there were a handful of parts left over that I had no idea where they would go, but they were mostly interior SNOT parts so cosmetically I was able to finish the job without them. There was one 1×10 brown plate left over, but I think I had put a 1×4 and 1×6 in the model when I was rebuilding it, so that’s probably where that one had been. 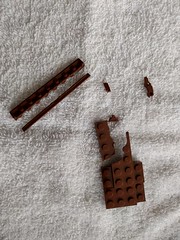 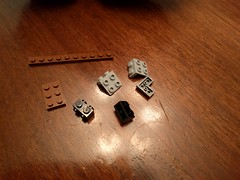 When it was all done, I put Teddy on my couch for a photo. Now he’s finally rebuilt! But I probably won’t be taking him on any more airplane rides… 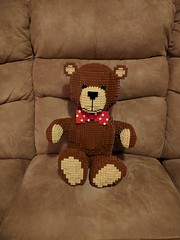 Update: Since writing this, I overcame my fear of taking him on airplanes, and took him all the way to Australia for Brickvention, Portland Oregon for Bricks Cascade, and Portugal for the Paredes de Coura Fan Weekend in 2017. I had to do some significant repairs in Australia, but after that trip I learned the secret to traveling with LEGO models – wrap them up in cling wrap (Saran wrap) and then wrap that in shipping tape. Once I mastered that, I feel I can take him anywhere and have him arrive with minimal damage.