Today’s Advent Calendars give us two parts FAIL and one part WIN. In order of decreasing win we have an AT-AT, a hand truck of tires, and a sled trailer that can be towed behind the snowmobile/sled we found in Day 2. 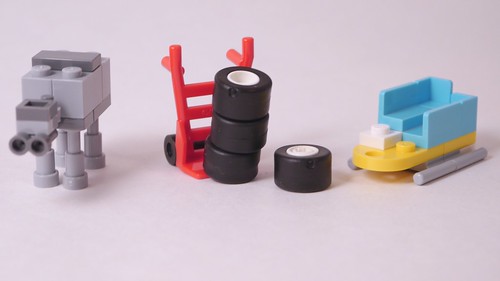 The AT-AT walker in the Star Wars set is absolutely adorable, isn’t it? Awww. And I like the telescopes in light grey, which I don’t think I’ve seen before.

But the other calendars have problems. First in City we have a hand truck for schlepping four tires. But only three tires actually fit on it, so you have to make two trips (at least the diagram on the box shows that correctly). But the problem is that the hand truck barely holds the tires as shown. The stack of three tires is very precarious, and falls over easily.

However, the big fail is in Friends. I’m missing a part!! As you can see above there is a white 1×4 plate missing. I fished out a plate from an earlier day’s entry to build it properly, and you can see the fixed one here: 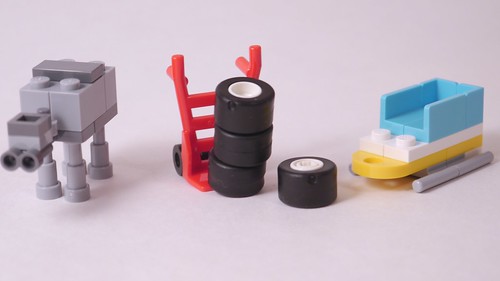 But isn’t that AT-AT so cuuuuuute?? So far I’m liking the Star Wars calendar best overall, how about you?