I built a little model of the beloved 1980s video game character, Q*bert. It’s basically just a Lowell Sphere but with some SNOT modifications to accommodate the nose and feet. Enjoy! 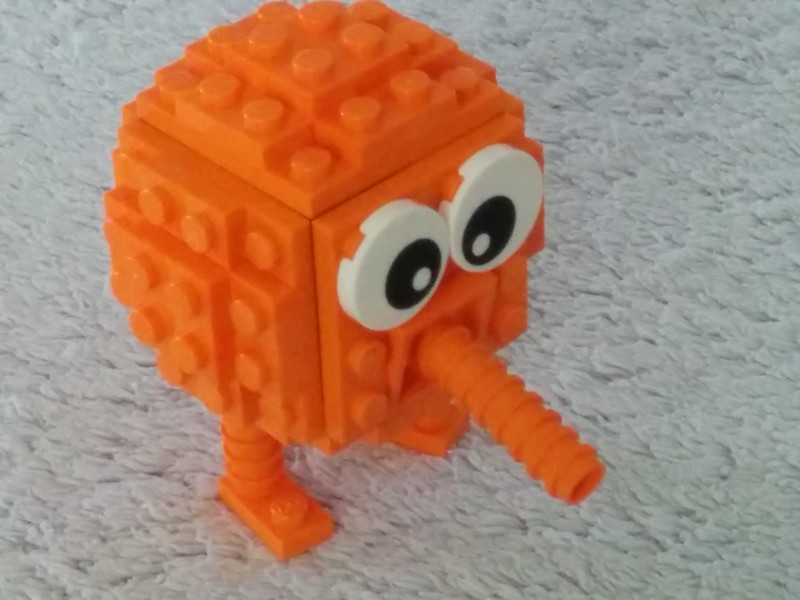 Spring is here and with it come two ages-old symbols of fertility – the rabbit and the egg. But since Easter comes in the springtime, these symbols are part of the Christian tradition of Easter. Either way, they’re cute and so I decided to make a LEGO bunny and some eggs.

END_OF_DOCUMENT_TOKEN_TO_BE_REPLACED

I won this bulk bricks box (#6177 Builders of Tomorrow) at the annual BayLUG raffle, and took it to work, where I built a couple things: Easter Bunny with two eggs, and a couple trees (not to scale).

END_OF_DOCUMENT_TOKEN_TO_BE_REPLACED

The February BayLUG meeting had an “animals” contest theme, so I put this together the night before. Like the Xmas Ornaments I posted about a couple months ago, it’s basically an elongated Lowell sphere, with head and legs attached and an ice cream tail.

END_OF_DOCUMENT_TOKEN_TO_BE_REPLACED

March 17th is St. Patrick’s Day, the day when just about everyone in the U.S. claims to be at least a little bit Irish, which means wearing green clothing and often imbibing copious amounts of beer with green food coloring added, especially when it falls on a weekend. (There’s very little to do with saints involved.) And more to the point, images of leprechauns. END_OF_DOCUMENT_TOKEN_TO_BE_REPLACED

Whether you’re married, single, dating, engaged, or anything in between, have a happy Valentine’s Day. If you’ve found love, celebrate it. If you’re looking for love, may you find it.
(Click the photos to see more views of those models.) This is my first abstract LEGO sculpture. I was inspired by someone (sorry I don’t remember who it is right now) who brought several abstract art pieces to Bricks by the Bay last year made out of the dark pink 1×2 slopes, which were available at the LEGO store Pick-A-Brick wall. I always wanted to do the same and finally I got around to it, producing a series of small fractal models and eventually coming up with this monster.

I built this out of about two Pick-A-Brick cups’ worth of the slopes. It is what I call “lower-case F fractal” in that I don’t know if there’s any math behind it, but it does have self-similarity as I understand it. The basic element is 3 bricks stacked together with one going off to the side, and torqued as far as the slack in the parts will allow. Using that same angle (determined by the slack in the parts) I then built up 5, 10, 20, brick heights following the curve until it meets its neighbor. This picture was taken on the final day of BayLUG‘s exhibit at the Museum of American Heritage in Palo Alto, CA (January 9, 2011) and is a part of a set of photos taken on the last day and during teardown.

My latest LEGO model, just in time for Christmas, is the Nutcracker, a classic Christmas icon. In fact, it was built on Christmas Eve! Inspired by the ballet by Alexandre Dumas pÃ¨re (an adaptation of the story “The Nutcracker and the Mouse King” by E. T. A. Hoffmann), set to music by Pyotr Ilyich Tchaikovsky and staged by Marius Petipa. My wife and I saw the San Francisco Ballet version of this last week, and I’ve been wanting to make a LEGO nutcracker ever since. I was going to make a big one, about two feet tall, but haven’t got around to it yet… in the meantime I really like the way this little guy came out.

The mechanism functions pretty well; by lifting his coattails his mouth opens, just like real wooden nutcrackers. Of course, being the size that he is, you can’t crack much of a nut with it, which is probably just as well since it would most likely fall apart in your hands if you tried – LEGO studs’ clutch power is no match for your average nut. Click on any of the images for a bigger view, or go to the Flickr photo set (slideshow)