I learned this week of the tragic death in a car accident of Arthur Gugick, beloved LEGO artist from Beachwood, Ohio. 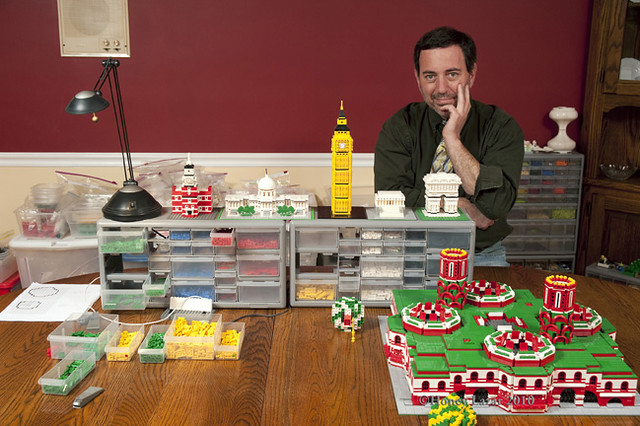 Art was a talented builder who was a fixture at the Brickworld LEGO conventions in Chicago (which I have attended a couple of times, most recently in 2014). Besides admiring his work, I met him at Brickworld and had some very enjoyable conversations with him there. He was always eager to share his work and building techniques with the community and the impression I had of him was of a very friendly and kind man.

He was best known for building scale models of famous buildings such as the Taj Mahal, St Basil’s Cathedral, and other well known landmarks from around the world. He also was known for his lenticular mosaics – mosaics made using cheese slopes of different colors so that you see one image from one side, and a different image from the other, such as Dorothy / the Wicked Witch (link is to a video showing the technique) from The Wizard of Oz. However his LEGO artistry covered a wide variety of other areas as well.

Besides his notoriety among LEGO fans at Brickworld, he was also loved for his work with kids. He was a high school math teacher, and taught LEGO as well to his students, including using advanced math computations to design his LEGO creations. According to Fox 8 News, he was killed when the Uber he was riding in was hit by another car that ran a red light, in Shaker Heights, Ohio. The driver has been arrested and charged in the incident.

His talents in the LEGO community will be deeply missed. Rest in peace, Art. You can browse his Flickr feed or his website to see the great creations he has made over the years. See also The Brothers Brick’s obituary and Plain Dealer (newspaper) obituary. Donations in his honor are suggested to the Carol Kestenbaum Foundation.

One thought on “RIP Art Gugick”