After the flurry of activity on my blog in December for the Advent Calendars you may have wondered why I disappeared… well the reason was I took a vacation to Australia right after Christmas! 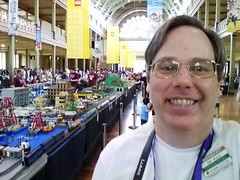 I spent New Year’s in Sydney, did lots of sightseeing, and ended up at Brickvention in Melbourne. I’ll be posting the travel photos soon on a new travel blog I’m going to be starting, and will post a link to it here when it is live so you can check those out if you want. But the photos from Brickvention are now available online, and here they are! (Click images for a bigger one, or see links at the bottom to Flickr albums.) 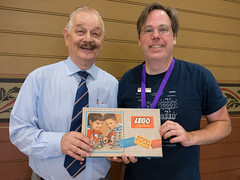 On the Convention day (Friday) we started off with a talk by John Peddie, who had been the LEGO executive responsible for introducing the sets to Australia in the 1960s. He brought an old set to show what he was selling back then. After he left the stage I got to talk to him one-on-one and he consented to some photos.

We also had a presentation from LEGO Australia introducing their latest promotion, a contest for building models iconic to Australia. Some people told me I should enter my kangaroo, but as I’m from overseas and I built it before coming there, it didn’t seem like it would be eligible. The main event was a talk by JK Brickworks, i.e. Jason and Krystal from Canada, about how they got started and how they designed and built some of their most famous models. I brought a 2×4 tan tile for Jason to sign, and it’s now part of my 21305 Maze which he designed.

We also played some games – there was a Build in the Bag contest, where every attendee received a copy of a small Star Wars set (A-Wing Starfighter Polybag) with the parts sealed in a ziploc bag that was stapled shut, in our convention goodie bags. At the appointed time, we built these without taking any parts out of the bag, and the fastest contenders went into a second round to compete for a prize. I narrowly missed being one of the top times (I think I was about 10th and the top 8 went on). We also had a timed tower build – we had 5 minutes to build the tallest tower we could out of only 2×4 bricks. My group won that contest! 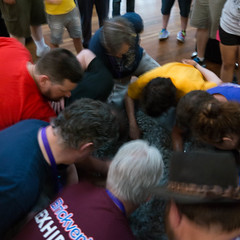 In the evening, there was a trivia game for teams of up to eight players, and in between each round of questions, some challenges – for example, a dancing contest where two members from each team had to dance while holding a little clump of Duplo bricks between their foreheads, and the longest to last won; and a contest where one member of each team had to dig around, using one arm only, in a kiddie pool full of hundreds of identical 2×4 bricks to find two that didn’t belong, which turned out to be Mega Bloks! I was not successful at this one, but I consider that a win in its own way to not have to touch the evil clone bricks. 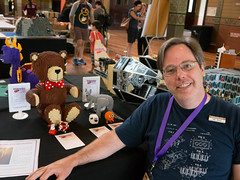 I managed to bring several of my creations all the way to Brickvention – Teddy Bear, Kangaroo and Joey, Q*Bert, Snoopy & Red Baron, Sheep, and Stay-Puft Marshmallow Man (sorry no blog entry available). The models got somewhat smashed up in my luggage, even though I carried it on rather than checking it, but I was able to rebuild them before the convention at the house where I was staying in Melbourne. 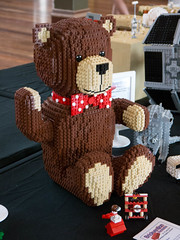 Partway through the weekend I modified Teddy’s right arm to be upright rather than forward – which do you prefer? I changed it back at the end of the last day.

The Marshmallow Man has been around for a few years – originally I designed it as a commissioned piece, for someone in my local club who wanted to put together a Ghostbusters diorama, but I made a copy for myself as well. 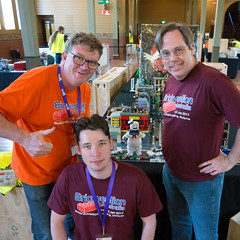 At Brickvention during setup I talked to a local builder named Andy Kochanski who, along with his father, had build an impressive Ghostbusters scene but he liked my marshmallow man better than his own, and I agreed to display it with his scene all weekend. We did a group photo at the end of the weekend.

Saturday and Sunday there were no convention events during the day, as that time was set aside for public hours. From 9am to 5:30pm each day, with entry times staggered throughout the day, the public would come through to admire the exhibits. Not being a fan of crowds, I snuck out to do some sightseeing for a few hours each day :) 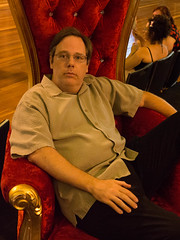 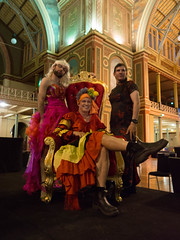 A highlight of the weekend was VIP Night (Saturday evening) where we had catered drinks and snacks, and people dressed up to mingle and show off their outfits. I didn’t bring anything suitable to dress up, but some people went all out – including a couple of guys who went in drag. Some of the ladies looked really nice in their evening dresses. There was a photo booth all weekend and people had fun in that, plus there was a pair of thrones that were on stage all weekend, which people had fun posing in. 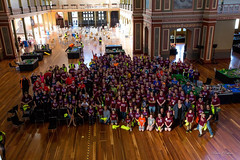 At the end of the convention just before teardown (called “bump-out” there) we were required to wear high visibility vests and close-toed shoes, but we paused to take off our vests for a group photo. Then on went the vests and we got busy clearing out the chairs, boxing everything up, and getting the heck out of there. I also took a group photo of the organizing committee members just before everything was torn down. 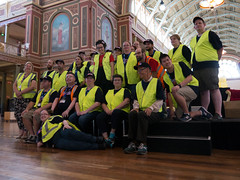 I had a wonderful time at Brickvention and visiting Australia. Special thanks to the great folks who hosted me while I was there – Matt, Neil, Rose, and Suzi; to Alison for arranging a sailboat tour of Sydney Harbour on her dad’s sailboat; and to Veronica and Mark for showing me around Geelong and Queenscliffe and hosting a BBQ in my honor at their house. While those expeditions weren’t LEGO-related, I met all these great people through the Brickvention and MUGs (Melbourne’s LEGO club) community; and in particular, thanks to Sue Ann who was one of the Brickvention organizers and who vouched for me (we’d been Facebook friends for years and finally met in person when I went to the SkÃ¦rbÃ¦k Fan Weekend in 2014) which prompted such a warm response from all the other people, none of whom I’d ever met prior to this trip! It was great to meet all of you, and hope I can get back to Australia soon.

For the rest of the photos see my Flickr account, where I divided the photos into four sets: