My LEGO gas station is now on display at the LEGO store in Pleasanton, California at the Stoneridge Mall. I built it in 2012 and first showed it at Bricks by the Bay, but never posted a blog entry about it until now.

This creation started when I saw a photoshopped image on Facebook of a gas station with the prices changed to “ARM,” “LEG,” and “BOTH,” with the ubiquitous “9/10” after each. When I saw that, I knew I had to build a LEGO gas station just so I could make that sign.

It’s appeared in several of the BayLTC and BayLUG shows since it debuted at BBTB 2012, and today I installed it in the LUG Showcase display at the LEGO Store in Stoneridge Shopping Center in Pleasanton, CA. I rebuilt the adjacent streets using tiles and baseplates instead of using the stock LEGO roads, to better fit the dimensions of the store display window, but the gas station itself is unchanged. It’ll be on display there for about a month. 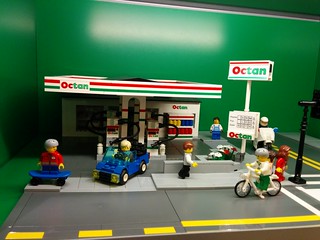