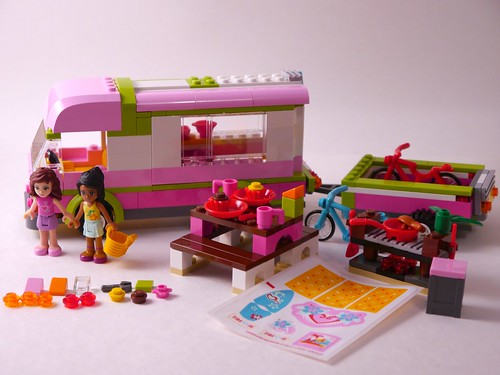 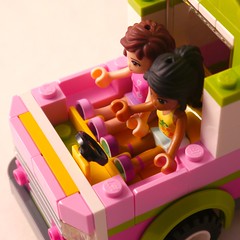 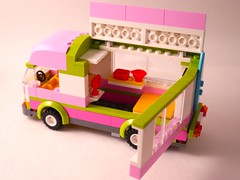 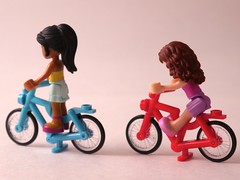 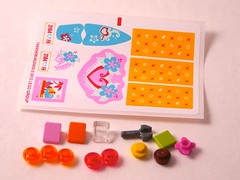 I built this many years ago (2003 or so?) but never posted it online before. It’s been on many BayLUG and BayLTC displays, though. I’m still fairly happy with it, though it could surely be improved in a number of ways.

The trailer attaches via a Technic axle to a bracket in the truck bed, and is a “toy hauler” – it contains an ATV (All Terrain Vehicle) for off road fun. It has two slide-outs, one in the bedroom in the front and another with a dinette in the center. Admin note: Over the span of the next few weeks I plan to post a bunch of older models online. After Maker Faire I brought all the boxes of models that have never been posted into the house, and am slowly working through them doing photo shoots and blog entries, and in some cases to make LDraw files for building instructions. So while the quality of construction might not be as good as stuff I would build today, they’re still models I like enough to show at train shows and events like Maker Faire. I hope you enjoy them.

Flickr user jedimasterwagner has made a great little desert diorama, featuring my Shasta Teardrop travel trailer, a Jeep by Mike Psiaki, and a cactus based on an idea that Flickr user brickpoor brought back from BrickWorld. Found via Lego Diem. Looks like the diorama was created using LDraw and rendered in 3D. I think it came out quite good – and great work on the mosaic billboard!

This high-end luxury motorhome allows you to travel in class! Features three slide-outs, including one that is almost the entire left side, a powerful diesel engine in back, two bathrooms, plentiful storage underneath, a well-appointed kitchen, and much more.

It is based on the Fleetwood Revolution LE 42K Motorhome but I should admit I took a lot of artistic license, especially with the artwork on the sides.

This is pretty much the diametric opposite from my last RV model, the Shasta Teardrop Travel Trailer that I made a couple of weeks ago. While that one was small and minimalistic (with only the most basic interior, and no removable roof) with classic styling from the 60’s, this one is modern and contains all the amenities you could wish for. However, neither model has 4 wheels, so both are eligible for the All But Four challenge on LUGNuts. It’s also eligible for a new Flickr group I created, LEGO RVing.

Hope you enjoy it, and please post comments here or on Flickr. If you want to see it in person, come to the BayLUG exhibit at MoAH in Palo Alto, CA – I’ll be bringing it there tomorrow and it will be there through January 11, 2009.

I just wanted to say thanks to Jonathan Bender for selecting my Shasta Teardrop Travel Trailer as his “MOC of the Week” when he was interviewed on LAMLradio Episode 69. (If you just want to hear what they had to say about my trailer, skip to 39:02)

Of course, thanks to The Brothers Brick for featuring the trailer a week ago, as that’s where Jonathan saw it…

If you don’t listen to LAMLradio, I highly recommend it. Hosts James Wadsworth and Aaron Andrews (“DARKspawn”) feature interviews with movers and shakers of the LEGO scene, talk about LEGO news, and discuss a few key “MOCs of the week” in each episode, which come out about once a week.

Lately James has also been putting out video podcasts, called appropriately enough LAMLtv. I’ve done two of those as guest episodes, featuring footage and interviews from BrickCon in Seattle last October, and have plans to do a few more. I’ll post those here too, of course.

(In case you were wondering, “LAML” stands for “LEGO and more LEGO”) 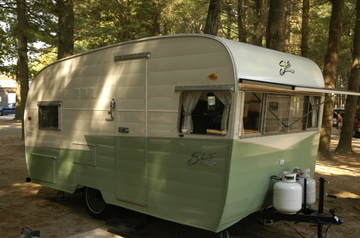