I’ve updated my Brick Geometry Presentations page to include the PDF from my talk given today at Bricks by the Bay in Santa Clara, CA. 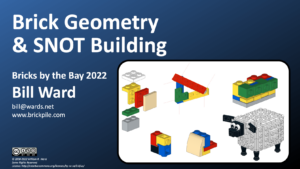 END_OF_DOCUMENT_TOKEN_TO_BE_REPLACED

I’m at Bricks by the Bay! 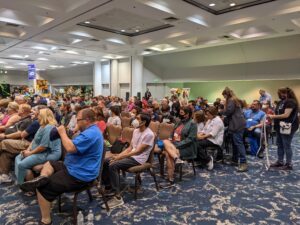 END_OF_DOCUMENT_TOKEN_TO_BE_REPLACED

I’ve been quiet on here recently, and haven’t been building anything in a while, but I wanted to say something about Bricks by the Bay which is coming up in just over a week.

This is our annual Northern California LEGO convention, and I’m the president of the nonprofit that organizes it. It’s coming up at the Santa Clara Convention Center from August 6-9, 2015. We’ve been super busy over the past few months getting all the planning and preparations done, and I haven’t had much time for anything else.

The theme this year is “Monsters” and we’ve got a great event kit which is a dragon designed by Charles Esseltine, and I’m preparing the instructions for building it as we speak. We have a great Guest of Honor this year, Alice Finch from Seattle who is bringing down her collaborative build with ArchLUG, the World of Mouse Guard, and giving a keynote speech. We also have a speech by Megan Rothrock, author of the LEGO Adventure Book series on Thursday night, and one by Tim Courtney of LEGO IDEAS on Saturday.

Convention registration closes this Friday, July 31st, so get your badge now! We will be open to the public on the last day, Sunday, August 9, for a Public Exhibition, so if you can’t make it for the whole weekend at least drop by to see the show.

More information, including convention registration and public day tickets, can be found on our website, http://www.bricksbythebay.com.

Our annual LEGO convention here in the bay area, Bricks by the Bay, just happened! I was so busy organizing it that I’m afraid I never got around to posting a blurb on my blog about it – hope you heard about it through other means and were there! It was a huge event, expanding to add a second ballroom, and adding an extra day (Thursday) for a new workshop program. We almost doubled last year’s attendance on the public day (about 4500 vs 2500 last year) though our convention attendance was down.

I’d like to announce the dates for next year’s convention, but we don’t have a firm commitment on the dates yet. The most likely dates are July 16-19, but we can’t be sure until we have a contract from the hotel. The theme for next year will be “Monsters” and we will be also making a special effort to highlight models with lighting effects similar to what they do at Brickworld in Chicago and BrickFair back east, shutting off the convention center lights for a few hours in the evening to let people enjoy the lit-up MOCs (My Own Creations). So start planning your monsters, especially ones with light-up effects!

I didn’t take photos at the convention, but here are some links to galleries that others have posted:

If you have some to add, post a link in the comments.