This musical family is performing a social-distance concert for their neighbors from their front porch and balcony in the time of COVID-19. Stay safe and stay home! 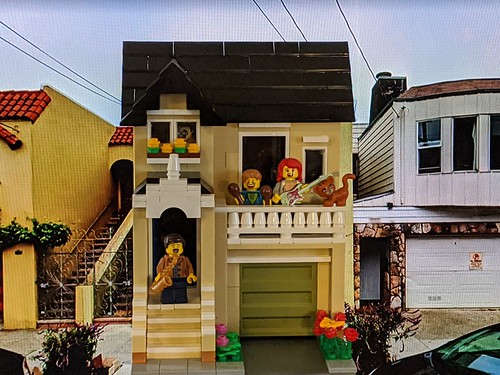 I originally built this model for a BayLUG online meeting in March, where there was a building contest theme of “quarantine” — but I didn’t get it finished in time for the contest. After the meeting I finished the model, but then I couldn’t think of how to photograph it. I considered going out on the street and trying to pose it in front of some real houses with the camera angle just so to block out the house, but that didn’t work in my neighborhood. I bought a new small lightbox to photograph things in, but this house is too big for the new lightbox, and my bigger old one is such a hassle to set up for just one photo that I put it aside. But then today I was watching Flynn & Richard’s TrickyBricks YouTube stream and one of the photos from this week’s build challenge had been photographed in front of a computer screen, and I suddenly realized what I needed to do! I spent some time on Google Image Search and eventually settled on using Street View to browse neighborhoods in San Francisco until I found a view that I thought my house could slot into, and the result is the above photo.

Now for some more photos exploring the model in a bit more detail and from a few different angles. Note that the house is really just the façade; there’s nothing to the sides or back but solid wall. First, we look at Dad on the front porch playing saxophone. Also, I’m pretty happy about the plants and the parts usage for the garage door. 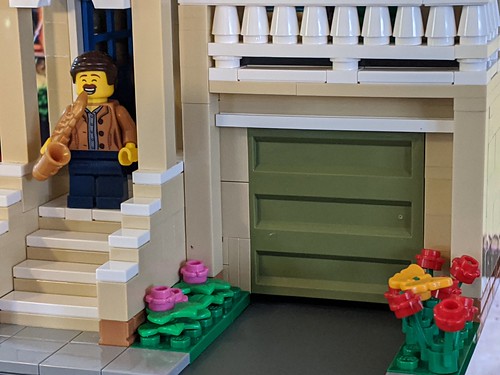 Mom (on guitar) and kid (with maracas) are on the balcony with the family cat. I need to get some more LEGO musical instruments; this model uses pretty much all the ones I have! 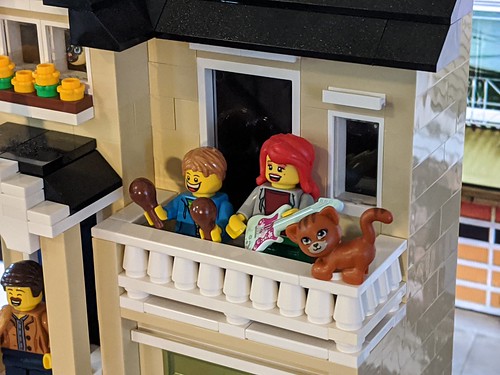 Their dog is peering out of the upstairs window. I don’t think he’s a music fan, unlike the cat. That’s OK, I like cats better anyway. 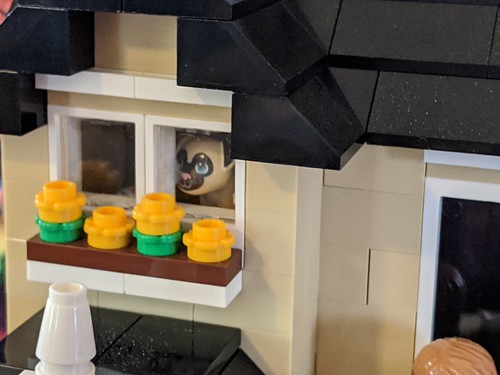 In this shot you can see the whole family together a little better. 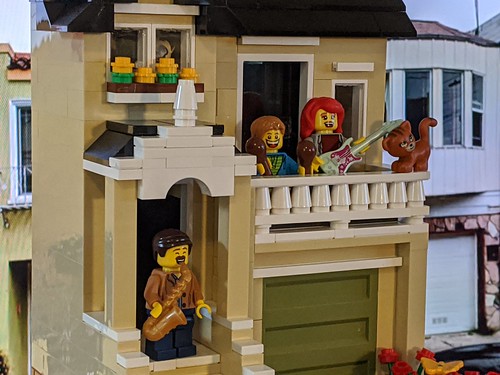 In order to take the photo, I found a suitable section of street in San Francisco on Google Maps Street View and put it up on the TV, then posed the model in front of it, and tried to pick just the right angle for the main photo to block out one of the houses. Here you can see how I made the sausage: 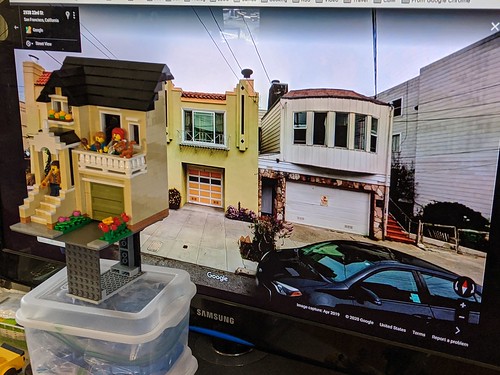 Note – I have no idea whose house it is; I just thought it looked all right. Please don’t bother whoever lives there if you’re in the area!