I’m playing catch-up on the Advent calendars, having started blogging on December 4th. This is the fourth entry and that brings us up to date (though it’s now after midnight as I write this, so we’re into day 5). In Friends, we get skis and ski poles, which makes sense. Star Wars brings us a micro Star Destroyer, okay. But in City we have …. stairs? And a magic wand? What is this for?

Day three in the Advent calendars brings us a Christmas tree, a decorative lamp with an ornamental sprig of green, and some kind of Gungan catapult thingy. I had to double-check the boxes to confirm that the Friends set gives us the lamp, and the City set gives us the tree. The oval shield in trans-purple with the printing on it in the Star Wars set is a really neat part. I really like the streetlamp design, but the tree is a pretty common design – every year there’s one very much like this in the Advent calendar set(s).

The second door in each of our LEGO Advent Calendar sets gives us Jar Jar Binks in the Star Wars set, a pink sled in the Friends set, and a chainsaw with log in the City set. The chainsaw is a clever build, using two pistols (or gas pumps, or fire hose handles, if you like) and a 1×1 brick with studs on four sides. The sled is pretty simple, but it includes “Panel 1 x 2 x 1 with Rounded Corners and Central Divider” in pink! And the less said about Jar Jar the better. 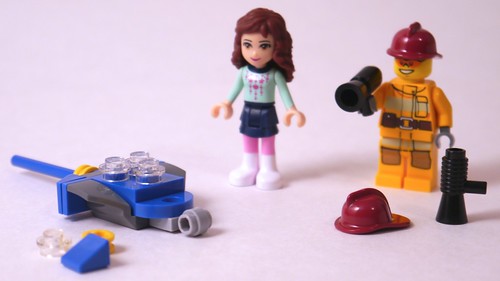